I've just uploaded the first Longing for Orpheus album, Skye, to Bandcamp, and had to listen to it to make sure all the uploads went good.  I say "had to" because it wasn't the most pleasant experience.  It forced me to closely examine the deepest point in my journey through the Gap.  If you don't know what the Gap is (hint: not a clothing store)...

Ira Glass, best known as host of the public broadcast radio show "This American Life," articulated a concept he calls 'the Gap' in this well-circulated segment.  While Glass' background is in broadcast,  it's widely accepted within the arts community that the concept is applicable to any creative endeavor.  If you'd rather skip the video, it's also been widely circulated in this graphical form: 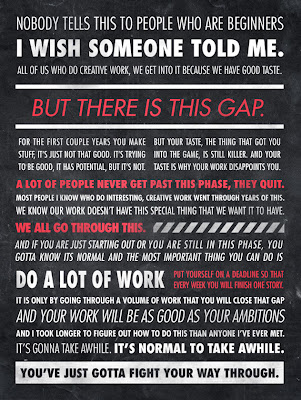 The painful thing about the Gap is that it can be really heard to tell whether you're still in it or not.  I might still be.  If I'm going by Glass' yardstick of "once your work is as good as your ambitions", I definitely am, but I've found that many great musicians find their work falling short of their ideals, so this may be a permanent state.   In any case, I'm comfortable asserting that I've made a lot of progress since Skye.

None of this is to say that I regret releasing Skye.  If I'm to trust Mr. Glass, it was a necessary step for my artistic progression.  But, there are things that really bother me about the album - poor mixing decisions, unrefined vocals, lyrical cliches, a general lack of polish...

So, if I have all these reservations, why make it easier for people to find Skye?  Why not just call it a learning experience, and pull it from distribution?  Partly because, despite the rough edges, I do think there are quite a few good musical ideas on the album...it's mainly their execution that bothers me.

Also, I want to avoid creating an air of mystique around the album.  All too often I've hunted down an artist's first, out-of-print release, sometimes paying five or ten times the list price, only to find that it was far below their usual standard.  This shouldn't have come as a surprise, particularly in those cases where the artist explicitly stated that something was out of print because it wasn't very good.  I don't think Longing for Orpheus is inspiring that kind of intense fandom, but I certainly hope it will eventually.

My final motivation brings me back to the concept of the Gap.  I think doing creative work is important and meaningful, and something everyone should be able to experience.  I think acknowledging the Gap,  and demystifying the creative process will help others understand, anticipate, and work through it.

There's an insidious myth embedded in our society, sometimes called "the cult of the genius"; the myth that things of beauty emerge whole cloth from a brilliant minds.  Yes, I think that type of genius probably exists, as exemplified by musical minds like Mozart.  But, there have only been a handful of Mozarts in human history.  Most art is created by normal people.  The notion that, unless you're born with a divine gift of creation, you'll never be able to make substantive art, is an idea that's prevents many people from even trying.  It robs them of joy and catharsis, and it robs the world of what they might create.  I think the genius myth persists because it makes a great story; It's the way creativity is presented in film and television. Most importantly, it persists because it's advantageous for successful artists to promote themselves as the embodiment of it.  Kanye West is probably the most egregious example in recent memory, but it's has been going on for hundreds of years - Michaelangelo went to great lengths to maintain the illusion of genius.

Now, we have a counter-movement, aiming to dispel the genius myth.  We have blogs like the one I linked to in the previous paragraph.  We have heated debate about the "10,000 hour rule," and how it might apply to creative work, all over the internet.  I think keeping Skye accessible helps, in a small way, to demonstrate the reality that people become good at doing creative work by doing creative work.  And that's how anybody can learn to make beautiful things.