Soon, I hope for my Synthpop band, Ice Queen Alias, to start performing live.  I intend to play drums, and I'm using Rock Band to learn how.

I don't have many regrets, but one that I do have is choosing to play the saxaphone, rather than the drums, when I joined the school band in 6th grade.  Now, don't get me wrong, there's a lot of value in learning to play a monophonic instrument like the sax, which I may bring up in a different post - but I love the drums, and I really wish I had spent some more of my formative years strengthening my sense of rhythm, and dexterity with a pair of sticks.

A couple of years ago, Rock Band came out, giving me a relatively cheap opportunity to bang on things in a rhythmic fashion.  It turns out, I enjoyed it even more than I thought I would.  So much, in fact, that I decided earlier this year that I wanted to play drums when Ice Queen Alias finally starts performing live.  I set a goal for myself - if I could score 5 out of 5 stars on 20 songs in Expert mode, I'd make a real commitment and buy some real (electronic) drums.  After three or four weeks of work, I reached my goal, and purchased a Roland TD-4 set.  I play a bit on the Rolands (and will focus more and more on them as Ice Queen Alias approaches live performances), but I still play a whole lot of Rock Band - an average of about 45 minutes a day - and I really feel that this is the most productive thing I could be doing.

I started taking piano lessons when I was in 3rd grade, and while I truly appreciate all my various music teachers have taught me over the years, I have hated practicing, and by extension music lessons, for as long as I can remember.  Past experience shows that if I had started taking drum lessons instead of playing Rock Band, I probably would have put in four or five half-hour practice sessions for the first month or two, which would have eventually fallen off to about one a week.  With the small, incremental goals and variety of songs and difficulty levels offered by Rock Band (plus the ever-expanding catalogue of downloadable songs), I've been playing the drums nearly daily for the better part of a year.

If I had the drive and focus to truly "practice", I would probably be advancing faster, and certainly be picking up complicated rudiments more quickly (I do occasionally work on these with a practice pad for a few minutes at a time - but it's unstructured and spontaneous, so I enjoy it).  But, since my goal is to play live on songs that I write, and not to become a marketable, well-rounded percussionist, this limitation on my advancement is really no big deal.

There are some distinct limitations inherent to Rock Band, in comparison to a real drum kit.  Rock Band has a kick pedal, but no Hi-Hat pedal; the pads don't have much "bounce"; the pads are too close together, etc.  I've aquired some tools, and adopted some techniques to wring all the training potential I can get out the game.

In Rock Band's default (right-handed) configuration, the left hand is typically assigned to the snare drum, while the right hand plays the hi-hats and the lion's share of the toms, crashes, and rides in fills.  I frequently sit down for a session, and immediately switch to lefty mode in the options menu.  This promotes limb independence, and helps to limbre up my left hand, which is still far behind my right in dexterity and stamina.  A strong and independent left hand is particularly important to me, as I intend to play "open-handed" when I play with the band, playing hats with my left hand and snare with my right.  This is a non-traditional style, but prevents all the arm-crossing nonsense inherent in more traditional drumming, and feels more comfortable and natural.

To compensate for the lack of a hi-hat pedal, I occasionally move my kick pedal to the left foot.  This certainly doesn't address the more subtle techniques of hi-hattery (half-closed position and all that), but it's a far cry better than no practice at all, and it has illustrated to me just how woefully behind the curve my left foot is.

The kick pedal that came with the original Rock Band was just awful, and the one accompanying Rock Band 2 is only a slight improvement.  Fortunately, there's a way to use a real kick pedal - unfortunately, it'll cost you around $250.  I already owned a Roland kick trigger, the most expensive element, so it was absolutely worth it.  The key element is the Kick Box ($65), a third-party device that converts signals from pro electronic drum kick pedeals to signals a set of Rock Band drums can understand.  It's made by a tiny little one-man operation, but it's a good product, and when mine got fried by a lightning strike, he reparied it for free, so I have no hesitation in recommending his business. 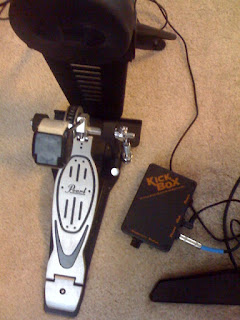 When I first started playing more intensely, and for longer periods, I developed pains in two places - a numb twinge in my wrists while playing, and a dull pain in my left elbow for a day or two after playing.  In part, this was caused by tension - I focused on relaxing my grip (as well as researching different grips online), and striking more lightly, and this pretty much took care of the numbness.  However, I didn't really overcome the elbow problem until I picked up a pair of ridiculously light sticks: 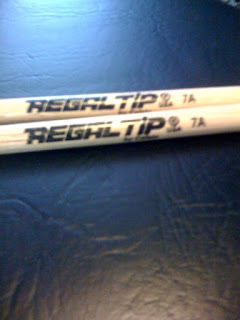 If you can't read the photo clearly, they're Regal Tip brand, size 7A.  I suspect that the Rock Band pads just don't have the bounce of real drums (electronic or acoustic), which is probably compounded by some poor-quality engineering in my own arm.  If I play too hard or long, I still get a little of this pain, but it seems to be fading as I build up stamina over time.  In any case, I highly recommend light sticks for long Rock Band sessions.

You Still Have to Use Your Ears


As strongly as I endorse Rock Band for improving your rhythm skills, it's still a game, and the feedback system is designed as such.  Consequently, it's possible to get a great score in Rock Band with some pretty inaccurate playing - you can get a little behind or ahead of the beat, or play with generally poor precision, but if you're "close enough", the game counts it as a hit.  So, if you really want to improve while playing, you still have to listen, and force yourself to concentrate on your weak points.  Going through the calibration process in the options menu is an absolute must.  Additionally, the game doesn't care how hard you hit the pads, but dynamics are critical in actual performances, so you have to pay attention to this on your own.
Posted by D Smootz at 12:34 PM No comments:

Once again, into the breach

As in my myriad artistic endeavours, I am once again overreaching.  I've maintained a blog before, but it had no stated focus.  I also have facebook and twitter accounts, plus 5 myspace accounts (4 belong to my various projects).  It is, of course, a fool's errand to add yet another project to my life, but here we are.

My intent with this blog is to share whatever insights I gain into learning new skills, and ideally, synthesize knowledge between seemingly disparate disciplines.  To that end, let me introduce my projects...

Longing for Orpheus: My furthest advanced electronic musical project, in a New Age/Ambient vein.  So far, I've released two self-published albums, doing everything up through the mixing stage myself, then hiring a mastering engineer and relying primarily on CD Baby for distribution.  I also did basic promotion work (radio and internet radio) for both albums.

Ice Queen Alias: A dark synthpop band that includes myself, my fiancee, and a friend of ours.  We're still in the writing-only phase, and have few songs up on MySpace.  I'm putting a lot of work into this project at the moment, and hope to start performing in local dark scene venues within the next six months (that's been a stated goal for well over a year, though...)

Artificial Emotion: My third and final music project, this is more along the lines of what people usually think of (in my experience) when you say "electronic music."  My concept of what fits here is ill-defined - it's kind of a catch-all for experiments and things that don't fit stylistically within the other two projects.  The one unifying concept is a sci-fi theme; I originally created the project with the purpose of writing a "Trance Opera" concept album, with a robotic protagnist (lots of vocoder!), and still hope to get around to it someday.

After Enigma - A Guide to Nu Ambient Music: Like its title implies, this is a web site dedicated to defining and exploring "Nu Ambient" music, mostly via album reviews and artist profiles.  It is, sadly, the most neglected of my projects.

Live Theater:  I consider myself a regular performer with three production companies in my area - The Wimberley Players, The Way Off Broadway Community Players, and The Gilbert & Sullivan Society of Austin.  For the past few years, I been performing in about four shows or so a year.  Multiple times, on recieving a role in a well-known show, I've trawled the internet for the thoughts of other actors who played that role, and have never found any relevant hits.  One aim of this blog is to rectify that.

Vexel art:  I just discovered the word "vexel" the other day, and it amuses me tremendously.  I have used the freeware GIMP tool a few times in the past, and it turns out it's a vexel tool - you can create persistent vector-based "paths", but in the end, you render them out to a big map of pixels, and that's your end product.  I've used GIMP for simple image manipulation in webpage design (for the pages linked above), and to design a couple of t-shirts before, but I've just recently (in the past few months) begun freehand drawing concepts, then using GIMP to create more "polished" versions.  I'll probably create a DeviantArt page soon, and post the link here.
Posted by D Smootz at 9:57 AM No comments: