I spent the last weekend, Friday through Sunday, at the O'Flaherty Irish Music Retreat, a bit south of the Dallas-Fort Worth area.  I expected a relaxing vacation flavored with some musical insights and a few tunes, but I ended up with gruelling, 16 to 18-hour, action-packed days (well, musically-packed, at least).  I could have opted out of some activities to have a bit of rest, but I was having far too much fun, and I couldn't let the opportunities pass me by.

When physical music stores were the only source of music (i.e., pre-internet), I spent a fair amount of time exploring the New Age sections at the local Borders and Barnes & Noble.  Space constraints tend to force music sellers to consolidate myriad actual genres into a few over-arching descriptors, and Celtic music tended to get lumped into the New Age section.  Compounded by the fact that there actually are a number of artists that fuse Celtic and New Age styles, including Enya (probably the best-known New Age artist around, whether she likes the genre label or not), I've tended to mentally tie Celtic and New Age together throughout my adult life.

One of the older albums in my CD collection, among those I found in the New Age section, is "Song of the Irish Whistle" by Joanie Madden.  Since I first heard that album, I've loved the sound of a slow tune on the whistle, and sometime around six or seven years ago I picked up a whistle of my own.  Since then, I've acquired a few more whistles, which I've noodled around on and used in a few Longing for Orpheus songs.  I've never put much effort into learning to play them in a proper way, by any definition of "proper."  During rehearsals for the Gilbert and Sullivan operetta Iolanthe over this past summer, one of my cast-mates mentioned driving up to an Irish music retreat for a weekend later in the year; I thought it might be fun, and provide an opportunity to get a new perspective on music.  So, I signed up for the beginner's Irish Whistle course...

At some level I knew there was a community and culture based on Celtic music, but I didn't appreciate how large or serious this community was - nor did I realize that Irish Traditional Music (ITM) is a very specific thing, and not synonymous with Celtic music (are there communities dedicated to Scottish, Welsh, and other regions of music, I wonder?).  I now think of the ITM community as a comporable entity to the Classical or Jazz communities.  In some ways, the ITM culture is far more limited - tunes are almost universally diatonic, and in a handful of keys (those with one to three sharps, both major and minor).   There are perhaps ten types of tunes, representing a few basic rhythms (jigs are 6/8, slides 6/8 with a particular syncopated feel, slipjigs 9/8, reels 4/4 or cut time, etc.), and no one really ventures into odd-time territory (no 5/4 or 7/8 experiments).  These limitations place the musicians' and listeners' focus on other aspects of the music, perhaps most intensely on performance style.

ITM also has one serious leg up on the Jazz and Classical worlds, and that's the tune session.  Sessions make Irish music something many people can actively participate in, rather than than just observe, and I think that's  incredibly cool, and probably central to the explosion of the music's popularity over the past few decades.  Still being a newbie, I could be mischaracterizing a "typical" session, but its basically a gathering of players who sits in a big circle and just play tunes.  If you don't know the current tune, you typically sit it out, but it seems you can generally get away with a bit of quiet stumbling as you try to pick up on the tune yourself.  The nature of these sessions puts a lot of emphasis on remembering a huge repertoire of tunes, and on learning by ear, which is a skill I desperately need to develop.  At the retreat, in any case, there were a lot of beginners, or at least beginners on a particular instrument, and so there were sessions geared specifically toward us.  It seems to be an axiom in this culture that you really have to listen and imitate to play this music properly, but the ability to jump-start the session experience by reading made my sessions far more enjoyable.  I overheard some talk about starting a teaching and/or slow session here in Austin, and that really excites me. 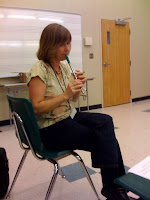 Okay, it's not really everything, but hyperbole is so effective... I went into this retreat already familiar with the Whistle's fingerings and breath support, but I had no idea how deeply integral style, and ornamentation in particular, are to playing Irish music.  Nor did I have any idea how to play any of the ornaments correctly.  Fortunately, my beginner-level class (taught be Janice Deane, in the photo there) didn't have any true beginners - everyone could read music or play an instrument already, so we were able to spend a good portion of our time focusing on whistle ornamentation, which is apparently based on Uillean Pipe ornamentation; the Pipes are among the oldest Irish instruments, and as new instruments have been integrated into the Irish music tradition, their players have typically emulated the style of the established instruments.  Pipes and whistles share similar fingering, so I'm now entertaining the long-term goal of taking up the pipes someday.  But, I'm not going to let myself think about that too much until I've learned a lot more about the whistle.  In any case, if I learned any generally applicable musical principle during the retreat, it's the importance of paying proper attention to every little bit of a musical line - a simple melody can be just a simple, boring melody, or it can be a canvas for musical expression, depending on the performer's competence, and how much they put into it.

I was surprised to hear that many of the instrument instructors would be doing lecture-type presentations on the history of Irish Traditional Music, both in general and as it pertained to particular instruments and regions.  I said to the friend that told me about the retreat that I "didn't think of musicians and historians overlapping much," and she replied that I was dead wrong when it came to Irish Traditional musicians.  I learned a tremendous amount about the background of Irish music from some of these players, but was most moved by Mickey Dunne.

It's easy to get used to phenomenal musicianship when you're surrounded by it, but I absolutely maintained my sense of awe at Mickey's piping throughout the retreat.  He was among the guests presenting an enrichment lecture, and his traced the tradition of Uillean piping back as far as the written word will allow, which is unfortunately only to the mid-1800s.  The pipes certainly predate that period, perhaps by centuries and possibly by millenia, but that's when the first written documentation of individual pipers starts.  Mickey is passionate about preserving the knowledge and techniques of the pipers who came before him, and his passion is infectious. 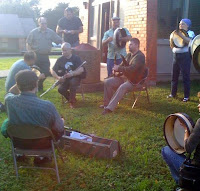 But, some of Mickey's passing comments are what are really sticking with me, and those relate to the early years of his life, when his family were "travelers."  That's the word he typically uses, but to clarify, he mentioned, "...or gypsies, tinkers, or whatnot" (paraphrased, not a direct quote).  Shortly after, he mentioned something about the travellers' reputation as thieves and trouble-makers being unjustified, since there were some bad seeds among them, but there were some bad seeds among "settled folk" too.  I think its fascinating to get a glimpse into the intricacies and tensions of another culture (it gives one a new perspective), even one that's relatively genetically homogenous - Mickey said that the travellers of Ireland really emerged from the famine of 1847, when a large portion of the population just started moving around in search of ways to survive, and maintained the lifestyle after the crisis was over.  The travellers have the same set of common names as the settled population, and I'm less clear on this point, but I get the impression there's still a non-trivial subset of the Irish population that leads a nomadic lifestyle.  In the 50s or so, the Irish government apparently made an effort to settle the travelling musicians, so Mickey moved into a house when he was about seven.  On the one hand, it seems a little strange to me that he puts such emphasis on a lifestyle he only experienced as a young child - he implied that the experience was integral to his playing and the musical tradition as a whole - but he speaks with such passion and conviction about it, and emphasizes the connection between the traveling busker and the musical tradition, so that I absolutely cannot dismiss the idea.  After all, for the first two thirds of the known history of piping (~1850-1950), the travelling life was the life most pipers led.

I could go on and on, but at this point, my time is probably better spent learning some tunes.  The retreat is over, but my enthusiasm has remained, and I just got a ticket to participate in a Whistle workshop with Joannie Madden at the Austin Celtic Festival in a couple of weeks...
Posted by D Smootz at 8:22 AM No comments:

It is constantly lamented in the Classical Music community that there aren't enough new fans, particularly young ones.  I think the Classical recording and publishing industry could do a lot to change this by abandoning one old but deeply rooted convention.

A few relevant ideas:
Most classical music is just impossible to enjoy in a noisy environment.  I've felt a bit guilty throughout my life that I don't care more about Classical music than I do, but every time I make an effort to listen to a Beethoven Symphony, I end up constantly twiddling the volume knob, or forget it's even playing during a quiet part, only to get startled when something loud happens.  For Classical music to have a fighting chance on my car stereo, and likely the earbuds of millions, it needs to become acceptable in the Classical audio community to seriously compress the dynamic range of recordings.

In an ideal listening setting, a large dynamic range is fantastic, and I don't think the old standards should be abandoned, but in the modern world of downloadable music (i.e., where there's very little cost associated with the actual transfer of audio data), it should be easy to provide both compressed and uncompressed versions of a recordings to listeners.

*For this discussion, I'm making a tremendous generalization and dividing EVERYTHING into either Classical or Popular - frankly, though, I have no idea how Jazz fits into this discussion.
Posted by D Smootz at 8:33 AM No comments: