On Picking an Instrument

I mentioned before that I didn't really think my time playing the saxophone in 6th-9th was worth it.  I've thought further, and have come to some conclusions about what set of instruments a well-rounded musician should study at minimum as they come up through school.

Harmony
If you want to understand western music, you've got to understand harmony, which is a much easier thing to do when you play a polyphonic instrument (i.e., one that can play multiple notes simultaneously).  Nothing beats a keyboard for clearly laying out the relationships of pitches to one another, or the black/white key configuration for illustrating the main scales in our sonic vocabulary.  Other traits that recommend the piano are a good dynamic range, plus a very transferable skill set; if you can play a piano keyboard, you can pretty much a play any synthesizer or organ, as well as more obscure instruments like harpsichords and harmoniums.

The guitar is another solid contender to fill the harmonic role, but I think that the variety of tunings and the fretboard structure provide a more convoluted model of the relationships between pitches and scales.  Like the piano, the ability to play the guitar is transferable to a myriad of stringed instruments, from the bouzouki to the oud, not to mention the rock mainstays of electric guitar and bass.

Melody
Plucked and hammered strings can be very moving, but there is no more expressive instrument than the human voice.  Even if you have no aspirations of singing long-term, taking formal voice lessons will likely teach you more about subtle expressiveness in a melodic line than any instrument.  To get the most out of studying voice, though, you must learn to sight-sing.  With an instrument, it's possible (and in my experience, common) to learn to read music by converting written notes directly into physical actions (keys pressed, breath exhaled), without really learning what specific intervals and chords really sound like.  That is, you can sort of inadvertently bypass the hearing part of the process.  Every college music student is expected to be at least minimaly competent at transcribing and playing back what they hear.  At my school, there was a class called "aural learning"; practically every singer in the class breezed through with an A, while many instrumentalists struggled to pass.

Ensemble
Finally, any decent musician is going to be expected to perform as a member of a group, whether it's a drum line, symphony orchestra, or power trio.  There are any number of ways you could go here, but I really think violin is the best choice (and, by extension, a school or community orchestra) - it's useful in orchestras, country music, and the occasional rock group.  There also seem to be more paying gigs out there for violin than any instrument save piano (and most of those are accompaniment jobs).
Posted by D Smootz at 8:49 AM No comments:

In my old blog, I pointed to game designer Mark Rosewater as an unlikely source of artistic wisdom.  Though I haven't kept up with his writing over the past few years, the main point I originally took from him is still as relevant - structure helps creativity.  This seems counter-intuitive, but I've found it to be true. Tom Shear of Assemblage 23 recently mentioned in his blog that having fewer options makes him more productive, in that he has fewer opportunities to get distracted.

Not to get too terribly meta, but I think my previous post is a perfect example of structure aiding creativity. Ordinarily, a games-centric convention wouldn't be relevant to an arts blog.  Further, it would have been very time-consuming for me to filter out interesting bits of the con into a general-purpose post, and it probably wouldn't have been particularly cohesive to read.  The stated purpose of this blog forced me to focus on a few aspects of my convention experience, and I was able to quickly (relatively) write up a pertinent post.  In fact, this is the primary reason I started this new blog, rather than reviving the old one.
Posted by D Smootz at 5:28 AM No comments:

I spent the past weekend in rainy Seattle (a beautiful contrast to the record heat that central Texas has been experiencing), attending the gaming convention PAX.  While much of my convention experience is wholly unrelated to the subject of this blog, I attended a panel on the Rock Band Network, a program that's going to allow independent artists to get their music into the Rock Band store, and the keynote speaker spent some time addressing a big question that's been floating around the gaming regions of the blogosphere for a while now... 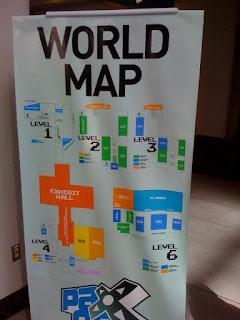 The keynote speaker was Ron Gilbert, designer and programmer of a number of successful games over the past quarter century.  As an industry player, I would assume that Gilbert's answer is biased (its "Yes," of course), and while he was a very entertaining speaker, the reasoning he presented in favor of games as art was a little shaky.  He cited attacks on gaming as demonstration that games are powerfully emotional and thought-provoking, which equates them to other art forms that have been censored through history due to their ability to challenge the status quo.

Jack Thompson is probably the most notorious detractor of video games, but his actions have been so over-the-top that he's been disbarred, and consequently I doubt that anyone takes him seriously anymore.  A quick Google search list is topped by Mothers Against Videogame Addiction and Violence, who equate gaming guilds with street gangs in their introductory paragraph.  Anyone tech-savvy enough to be reading this blog probably knows a few World of Warcraft players - please, suggest this premise to them, and see how hard they laugh.  The Chinese government has imposed restrictions on the length of time gamers are allowed to play, but they're primarily focused on students, and appear to be more of an attempt to make them spend time studying than to prevent them from becoming reprobates or criminals.  I suspect that only a small "lunatic fringe" truly views video games as a serious threat - then again, perhaps the art censorship of the past was enforced by a small lunatic fringe that just happened to gain power.

In any case, I happen to agree with Mr. Gilbert, but for different reasons.  One thing that has really stuck with me since college is the concept of gesamtkunstwerk - Richard Wagner (he who wrote the operas with the viking "fat lady") was a proponent of this philosophy of opera as an art form comprised of other art forms - he insisted that the music should not overshadow the acting, nor the stage design the plot, etc.  By the same token, it seems clear to me that since video games contain various combinations of visual art, music, storytelling, voice acting, etc., they too are an art form.  Perhaps the simplest of games, like tic-tac-toe, are not art, but even video games produced by one-person studios like Spyeart contain most of these elements.  While many games don't have much artistic value, the same can be said for many examples of any art form.  Relative to other arts, video games are a medium in their infancy, and I have no doubt that many classics are yet to come. 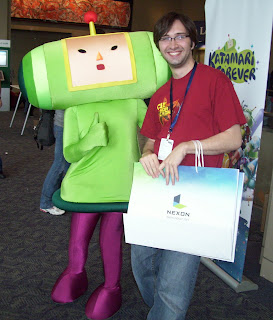 Harmonix (the games' developers) and Microsoft have refined and expanded the tools that Harmonix currently uses to incorporate songs into Rock Band, and are making them available to the music-making public.  A lot of potential users already have the right equipment (a PC and an XBox 360), so the cost of entry is only a $99/year subscription to the Microsoft's "XNA Creators Club."  The rest of the tools are freeware or inexpensive (~$60) software.  Songs authored via the Rock Band Network will be available through the same online store the current Rock Band selection, and creators will be able to set the price of their downloads within a certain range.  The current default is $1.99, and I'd expect prices to stay in that vicinity.  As of this weekend, 30% of sales is to be passed on to creators, meaning you'd have to roughly 170 downloads a year to break even.

The panel itself consisted primarily of a demonstration of the development tools, used to implement a song by internet nerd-hero Jonathan Coulton.  Sadly, we missed his big concert on Saturday night, but the front-row seats we had for this were pretty cool.  The rest of the post is going to be technical details, so if you don't spend any of your time in an audio sequencer, you'll probably want to bail out now. 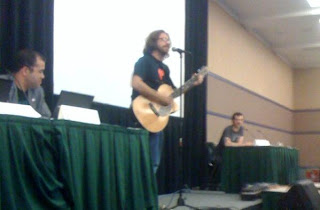 A plugin for Reaper is the centerpiece of the software tools. Specific MIDI pitches are mapped to the various instrument's pads and keys.  For example, the easy drums (with 4 drum pad and a kick pedal) might occupy C2, C#2, D2, D#2, and E2, the medium drums C3-E3, etc., and solid notes in the C5-E5 denotes a drum fill (these particular note ranges are just examples I'm making up).  There are macros to chop align lyrics with MIDI notes, but I suspect a little manual tweaking will still be required.  It will also possible to specify lighting changes and camera angles.  I'm unclear on a number of details (i.e., how hammer-ons are going to be programmed), but the panelists assured us that the documentation will be very thorough.  All of this must be programmed in sync with audio stems of the original song in Reaper.

After all the MIDI and audio stems are correct in Reaper, you use a custom tool called Magma ("because that's where rock comes from!") to compile everything into a file that can be uploaded to Microsoft's XNA network.  You can then download the song to your XBox to test out, and submit it for peer review.  I'm still curious about what all the peer review is aimed to weed out, and what will be allowed.  For example, can we put songs on Rock Band that don't use all the instruments, like instrumentals without vocals or ambient tracks with no drums?  Pearl Jam's "Master/Servant" is currently in the game with no vocal track, but did they make that exception soley for the sake of a classic album?  Will it be up the sole discretion of a fickle peer review community?  The beta test should be starting soon, so we shouldn't have to wait too much longer to find out.
Posted by D Smootz at 7:02 PM No comments: